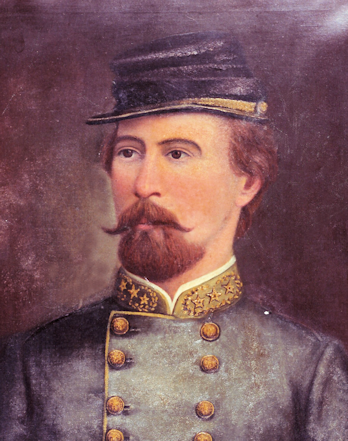 This portrait originally hung above the mantle at Woodville. It is now in the collection of the Virginia Museum of the Confederacy.

John Randolph Chambliss, Jr. (January 23, 1833 – August 16, 1864) was born at Hicksford  in Greensville County, Virginia. His father,  John R. Chambliss, Sr., was a lawyer and politician who later served in the Confederate States Congress. The younger Chambliss was appointed to the United States Military Academy, in the Class of 1853, distinguished by having 15 future Civil War generals in it.

He was a career military officer, serving in the United States Army and then, during the American Civil War, in the Confederate States Army. A brigadier general of cavalry, he fought at Gettysburg, Brandy Station, the Potomac, and the Bristoe Campaign. He was killed in action during the Second Battle of Deep Bottom.

A detachment of confederate soldiers came across the union lines under a flag of truce to retrieve his body. Thereafter, he was exhumed and delivered to his friends. It was buried in the family graveyard in Emporia, Virginia.(Wikipedia)